The art exhibition at the 2018 OHBM meeting featured the work of Singapore-based artist Shubigi Rao. 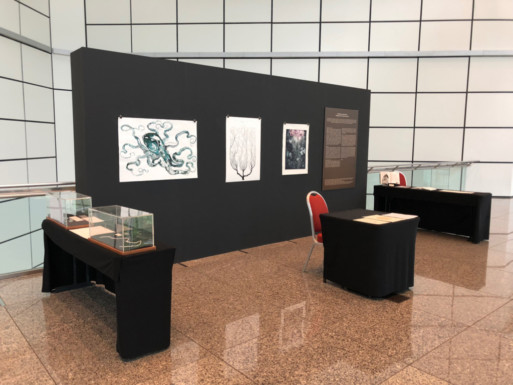 A Tree, A Treatise: Chatter at Cross-purposes

Each language has its particular poetics, little lock-boxes that defy translation, and therein lies the true attraction of studying language acquisition and transmission, whether in the singular or cross-species communication. It isn’t just humans that have evolved sophisticated language-sets. Drawing from the life and work of the now deceased and discredited polymath scholar S. Raoul, his biographer and protégé Shubigi Rao presents an ephemeral but tantalising glimpse into his controversial studies in interspecific communication, and its provocative implications for studying language acquisition, delusion-building and functional fictioneering in humans.

Recent studies by ornithologists and biologists cataloguing the languages of birds have revealed fascinating insights about how they communicate with each other, across classes (birds ‘eavesdrop’ on tufted titmice and other ‘crossing guard’ bird species at potentially dangerous areas, for instance) and across species. Squirrels can interpret alarm calls of birds, and even add ‘squirrel-ese’, which in turn is picked up by other species of birds, and some like the red squirrel imitate the alarm calls of birds that are ‘acoustically almost identical’. These sounds are picked up and broadcast by different species, like a bush telegraph travelling through the forest at speeds upwards of 170km/hr. Even deer, monkeys and fish recognise the alarm calls of birds. The richness of a single acoustic encounter between one pygmy owl and another species takes hours of decoding, even with specialized programming and hardware, and each is unique.

Raoul’s study was wide-ranging, from bees to birds, jellyfish to octopuses, and while largely forgotten, would prove to have far-reaching implications for mapping language acquisition, AI and machine learning, acoustical comprehension and selective hearing.

Shubigi Rao study of language under her now-moulderingmentor is now the subject of her current decade-long project on the history of book and library destruction, Pulp: A Short Biography of the Banished Book. The first portion of the project is currently on view at National Museum Singapore, as part of the APB Signature Art Prize.

Check out the results of the 2021 Brain-Art Competition!