neurobureau
I was invited to BrainHack by my external thesis examiner, who just happened to be one of the founding members of the Neuro Bureau – a man of many hidden talents and possible last name pronunciations, Daniel Margulies. A newly minted PhD in hand, I approached the BrainHack experience with some trepidation, as my connections (pun intended) within the imaging world were limited. My concerns were quickly discarded as I was caught up in the collaborative atmosphere that took hold almost immediately among the attendees (students and professors alike). Over a meal, I broached the subject that with the extensive amount of expertise in the room we could probably complete an entire project in a single day. And with that began the 24-hour project! The goal of this project was outlined: to complete a task-based (rest would just be too easy) fMRI experiment from conception to manuscript within a 24-hour period. Daniel and Arno gave the go ahead, the troops were rallied (see photo) and the insanity began. While all the successes, tribulations, and legalities are best left to those who participated to share over drinks with selective censoring, the short of the story is that we did not meet the goal. Despite valiant efforts, we were hindered by administrative issues that limited our scanner usage, a problem that could have easily be resolved with minor a priori planning (Brainhack 2013?). But wait! There’s more… We regrouped, redesigned and began the 48-hour project! In the end, we completed a behavioral experiment exploring the visual identification of resting-state networks. Within 48 hours of the start date, a poster was created. The work was presented at the Biennial Resting-state Conference that immediately proceeded Brainhack. Notwithstanding some snickers (presumably because we were presenting behavioral data at an imaging conference), the poster, “Rest Self Examination” went on to win first place. Though we did not achieve our initial goal, at least in the form it was originally envisioned, both the power and potential of active collaboration was demonstrated. We were able to show that collaborative ventures such as the Neuro Bureau’s Brainhack unconfernce can make novel, time-limited projects feasible. The model also provides an exciting approach to allow for scientific questions to be identified, tested, and reported in an expedited fashion, facilitating progress within and across multiple fields. And still more… Drawing on the experience and success of the Brainhack, Catie Chang (NIH) and I began a review paper that included 18 authors (and > 16K words). Taking slightly longer than 24 hours, this work has just been submitted. There are a lot of analogies that can be drawn between the properties of brain networks and success in the world of academia, but I believe the most important of these is that with collaboration and coordination, more can be achieved than working in isolation. So add a few nodes to your network! 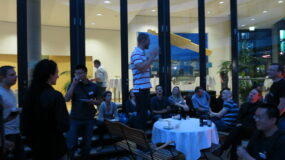 Check out the results of the 2021 Brain-Art Competition!